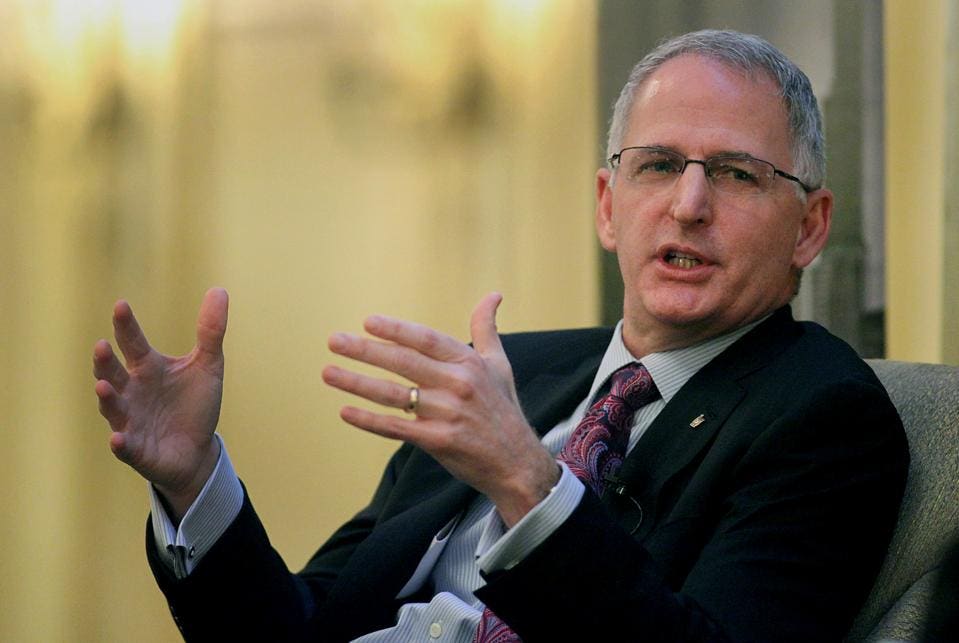 Former Walgreens CEO Greg Wasson thinks he can launch billion-dollar startups with lower risk than a traditional VC firm by helping big companies do something with their unused intellectual property.

For the past two years, Wasson has been working through a group called Innventure to help corporate behemoths identify and commercialize new technologies. Innventure has signed agreements with Procter & Gamble and Eli Lilly’s Elanco Animal Health, and set up its first company based on a P&G technology for recycling polypropylene plastic. Wasson told Forbes that he expects those two agreements to result in as many as eight new startups, each of which has the potential to become a billion-dollar company. “We have confidence we can start five to eight new companies with them,” he said.

Wasson, 59, spent 35 years at Walgreens, presiding over some of its biggest deals as chief executive. After the drugstore chain’s merger with its European counterpart, Alliance Boots, he left, and set up a family office, Wasson Enterprise, to provide angel investment to startups in health and retail. Chicago-based Innventure is a joint venture between that family office and a group set up by Michael Otworth, whose predecessor company XL Tech Group had long worked on the commercialization of technology and created 11 new companies. Wasson is chairman, while Otworth is CEO.

“What we are doing in a nutshell is helping large corporations commercialize their intellectual property,” Wasson said. “They have spent the capital developing it, and they either can’t or don’t want to commercialize it themselves.”

Innventure’s model is a different twist on helping large companies commercialize R&D. Once it signs an agreement with a company, such as P&G or Elanco, it combs through the existing patented technologies to determine which ones might be worthy of commercialization. It then launches its own startup to do just that, paying a licensing or royalty fee to the corporate behemoth that developed it. “I do think we have an exciting new model,” Wasson said. “I think that it is an innovative way for large companies going forward to commercialize their R&D.”

Its first company, PureCycle Technologies, uses a new, patented technology to recycle polypropylene plastic without any residual odor, color or contaminants. The market is enormous, Wasson said, with 100 billion pounds of polypropylene used annually and now sitting in landfills and oceans. While P&G, which uses a lot of that plastic, would benefit from the technology, it isn’t in the business of building recycling plants, he said. “It’s not that they couldn’t, but they don’t want to commercialize it on their balance sheet,” he said.

PureCycle has selected a site for its new plant in southeastern Ohio, and expects to begin construction in late spring or early summer, so that the plant could come online in early-2020. “The production of that first plant is presold for many years out,” Wasson said. “P&G is expected to be a customer and others can benefit from recycled plastic.”

Innventure announced its second agreement, with Elanco, in January, and Innventure will now begin the process of plowing through its patented technologies to determine where it sees the biggest opportunities.

Wasson said that other companies, beyond P&G and Elanco, are already knocking on its door, though he declined to name them. “We do have others who have inquired and we are in talks with,” he said.

Compared to a traditional venture capital startup, where the technology hasn’t been vetted, Innventure’s approach is lower risk because the technologies are already patented and have potentially large market opportunities. “Most important, with these technologies, we have a built-in customer from day one,” he said.

Wasson declined to discuss Innventure’s budget other than to say that the startup equity came from its founders and it had access to “various sources of capital.”

Its goal in selecting technologies to commercialize is to filter out those disruptive technologies with large enough markets that they could pay off as billion-dollar companies within three-to-five years. “Our partners are looking for something that is a billion-dollar opportunity as are we,” he said. “That helps frame the size of the opportunity and the companies we are starting.”